The English Civil War in 6mm.

I have added this older blog to my links list as it might prove helpful to anybody considering doing the ECW in 6mm. I have to be honest and say that my own thoughts turned to 15mm figures and so all of the figures you see here were sold off and the project abandoned. I intend to re start the ECW project shortly but in the larger scale.
Posted by 'Lee. at 05:46 2 comments:

A Merry Christmas and Happy New Year to all who read my blog. A final couple of pics for 2012, the completed horse base referred to below. I'm sticking to just five basic colours for my horses now, enough to add variety to the units. I'll record these here for future reference, these have evolved out of a lot of trial and error with 6mm horseflesh, which requires some slightly exaggerated highlights especially on the hind quarters and the neck and raised muscles. 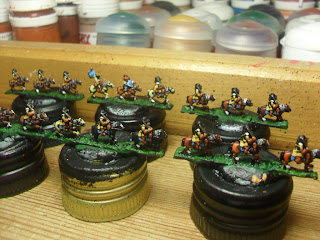 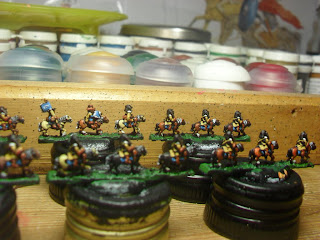 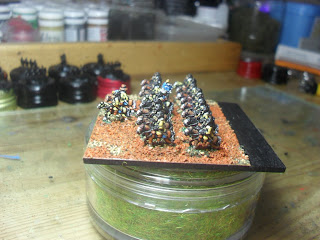 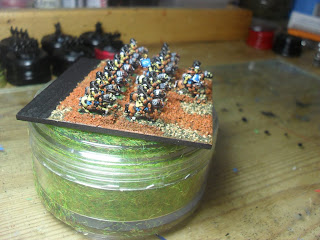 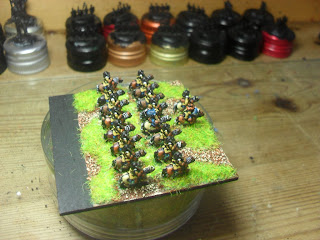 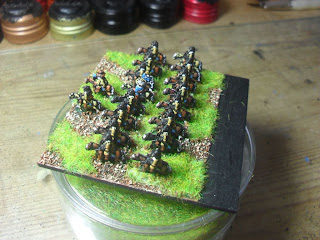 Not done too badly this week, 1 unit of commanded muskets, 1 unit of pike & shot, 2 more artillery stands and 3 command stands for Parliament. I also managed another building hex of 2 small cottages. I have another base of horse undercoated for painting today hopefully. This will give me 10 units of horse so far. Just waiting more my new supply of static grass to arrive now, caught up in the xmas post rush no doubt.

As time for battle gets closer I've been giving some thought to what scale I want to fight my battles in. One thing I like about Commands & Colours is how the troop blocks can represent anything from a single battalion to a full brigade according to scenario for Napoleonics. I have decided that for for my intended games using the C&C/ECW adaptions I'll be working on the basis of a base of foot representing a typical mid war 'local' regiment of between 200 to 300 men, possibly smaller, while my horse bases will each represent a troop of roughly 50 - 60 riders. I have little or no interest in fighting the big set piece battles of the war, I have always enjoyed reading those lively accounts of small actions that took place up and down the country throughout the war.

I'll be adding more buildings, 2 units of mounted dragoons to match the 2 dismounted bases already painted, and more foot over the Christmas period. 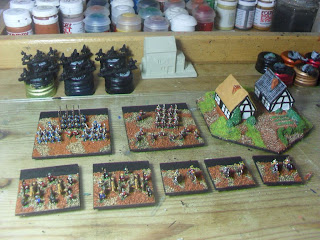 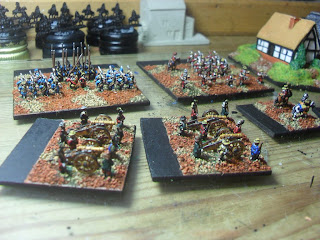 I have been thinking about our use of the 'stand of pikes' rule for this period. Tony has understandably proposed that we lift the 'square' rule from C&C as it works so elegantly well for Napoleonics. Over the years I have played many ponderous representations of units forming square during battle, but C&CN handles it extremely well. However, it is obvious that Napoleonic soldiers were far better drilled and trained than civil war recruits and would practice the square formation regularly as part of training. I'm not sure that a 200 man unit of civil war recruits would have been able to react in quite the same way, the stand of pikes being more a huddle of men (and often more of a 'circle' indeed) with muskets crouching under the outstretched pikes for protection. If anybody has any thoughts or evidence relating to the practical use of the stand of pikes formation I'd love to hear from you please. I will just add  in my Sealed Knot days we often used to form stand of pikes against horse and I could never help thinking that determined troopers could have simply ridden right through us rather than conveniently halting to hack at the pike points! This was not a formation to be compared with the rigid square formation presenting ranks of bristling bayonets of the Napoleonic period. Test games will show us how well the rule translates to the civil war period. 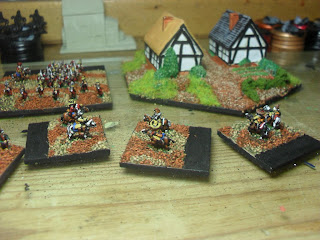 I have almost completed the first of my ECW buildings - a fine church from Baccus complete with churchyard. Really enjoyed doing this - I can see a few minor corrections I need to sort out - and overall I'm pleased with the result. I'll follow this with a few cottages and a water mill which should create a touch of period feel to the table. What I will need to do is to produce some small 'marker' bases which can be placed on the hex when occupied, for both foot and horse. I now have more figures to enable me to produce several more pike/musket units and more horse.

Tony has now revised the ECW/ C&C rules following a thorough play test and these can be downloaded from his blog here  (links at top right of the  blog)  I hope to recommence my own play testing shortly. 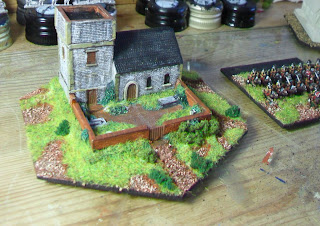 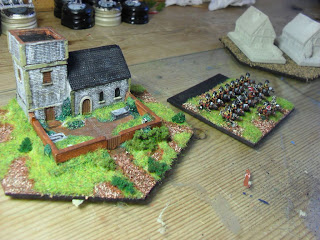 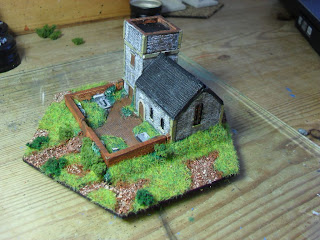 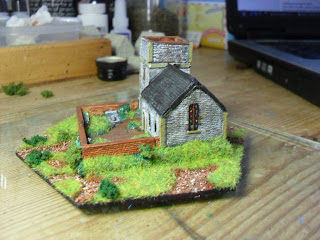 Just to prove that I am not completely neglecting this blog and project here are the latest two bases of horse, as yet unlabelled, one still awaiting basing texture etc.

I tried a few photos (well lots, as I enjoy doing it), under improved lighting. Camera is just basic, but I like to play with lighting. These are lit with a tiny but powerful 70watt Ceramic Metal Halides lamp, the bulb is not much larger than a thumb, but it gives out amazing light, looks quite 'blue' to me but I'm told it's full spectrum. The bulb clips into a small compact holder and is powered via a miniature ballast, wonderful pice of kit for photographing tiny toy soldiers!

This is the collection so far. If you visit my Napoleonic blog (right) you can see I have been busy with terrain work. THis week I'm ordering some ECW buildings as well as more figures. Thanks for sticking with me, there will be some battles in the not too distant future now. 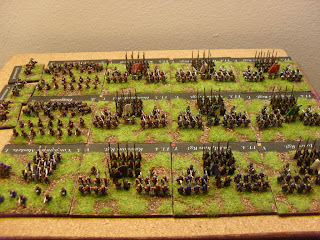 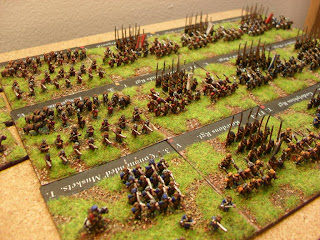 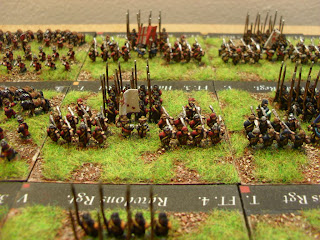 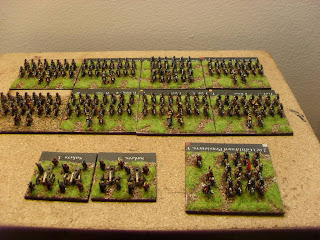 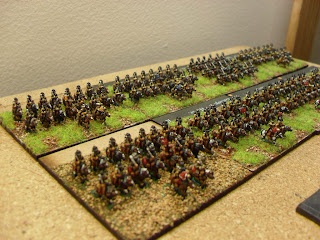 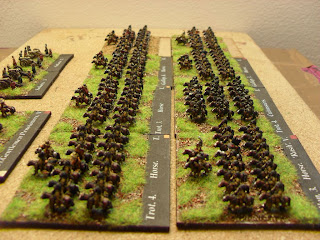 Here are a few images from the early stages of the test game I played through a couple of weeks ago using the C&C/ECW variant rules. I must admit I have not yet had time to write a follow up piece describing how the game went and my thoughts on the rules, but I hope to get that sorted shortly. These pics show how my hex grid and terrain are used. I couldn't help feeling that I'd prefer a more natural flowing terrain board for this period, I'm not quite sure why that should be though. Certainly I'm giving a lot of thought at the moment as to which direction to go regarding terrain. 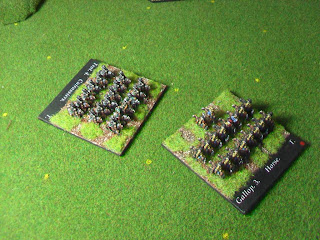 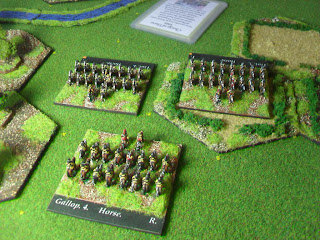 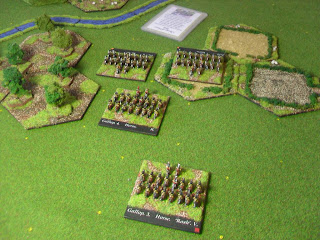 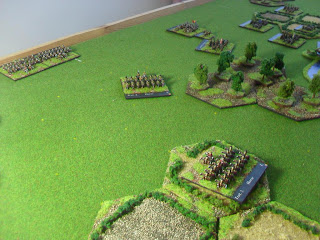 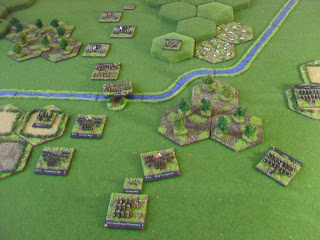 Not bad going so far, 4 bases completed and just the Dragoons to finish off, the nags in fact. I decided to base the 'Lobsters' 3 deep. I tried not to make them as 'showy' as the previous cuirassiers representing the Troop of Gentlemen Pensioners, but still gave them a very light drybrush to pick out the armour. I doubt I'll be painting any more of these now. I managed to paint a tiny anchor on the green cornet to represent Sir Arthur Hesilrige's own troop. Hesilrige himself wore 3/4 armour in the field as we know from the account given by Richard Atkins who engaged him in close combat and discharged his pistol almost touching the heavy cuirassier headpiece, but failed to penetrate it.

The portrait below shows Haselrige in 1640 (unknown artist) and depicts him in high quality heavy armour, possibly that later worn in action during the Civil War?

Right then, need to finish those Dragoons now and get them based up. Then I'll get the table laid up for the test game, possibly over the weekend. Next week I have a couple of commission jobs to paint, but I'm sure I'll still get to add another base or two for myself. Note: those white edges to the foot flags will be painted in, such things tend to irritate me and must be corrected! 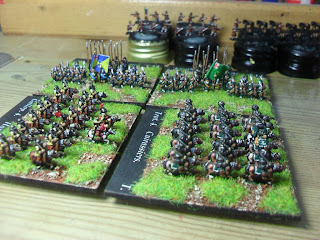 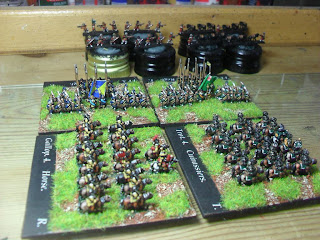 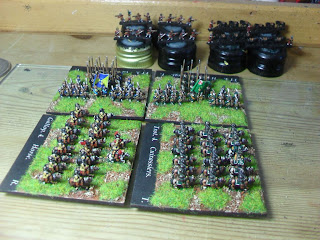 All figures by Baccus 6mm.